Things You Should Have Already Experienced On The net

Things You Should Have Already Experienced On The
http://www.youshouldhaveseenthis.com/
http://postsecret.blogspot.com/
http://www.youtube.com/watch?v=3CTw2CLIBFY
http://debunkingchristianity.blogspot.com/2006/05/homosexuality-bible-vs-nature.html
http://www.youshouldhaveseenthis.com/
list of things u should have experience on the net imp for ur over all growth. surprised to many here think homesexuality is bad ---> that explains our clueless leaders. "People get the government they deserve" so until we dont educate ourselves we will fall for a lot of lies be it as a consumer or as a citizen ....
how easy it is to fall for a lie --> http://www.nytimes.com/2009/02/21/nyregion/21scam.html
Posted by Unknown at 5:40 PM No comments: Links to this post

I"LL TELL YOU WHAT I WANT!

nda = bjp = less freedom, as good as living in a muslim or communist country "pub culture is bad" talk to other communities and your bad! no thanks rather a govt that podges around and does little than a govt that does crazy things
isn't the judiciary supposed to be separate from the govt? so "Death to Afzal within 100 days if NDA voted 2 pwr" means they will put pressure on the judges and get it into fast track? why not fast track now? cant we ask the current court to do that? there is enough proof - on film + his own statements to convict. police have had enough time to ask him questions, could have recounted every incident in his life by now.
if they control the courts for this tomorrow they will control the courts for other things in their favour / in the favour of their close supporters who give them biggest bribes.
I wont vote for anyone who says closing pubs is good, controlling basic freedom is the need and are so far right that we will not live in a democracy anymore.
I"LL TELL YOU WHAT I WANT!
arey yaar,humko
-development
-security
-market stability
-eradication of slums and proper housing to people
-free and compulsory education be given to all and enforcement of this law be done with the help of many organisations,hereby giving jobs to so many unemployed people to help other deprived get education
-we want equality in gender,no infanticide,no uneducated girls(I don't wanna live in a society where it is considered immoral for a girl to go to a school)
-we don't want people like sri rama sene and others telling us what to do,how to dress,how to not celebrate a day,what language to opt and speak,when to go out
-we don't want bandhs to be made a democratic right
-we want to have better equipped army + police + better all round training for them
-we want educated politicians and not criminal hooligans leading us yes a degree minimum to stand as MLA, MP, should have an active blog with feedback so can use technology to hear the people; with no criminal cases pending or convictions in any case
-we want better security for people  in our country,at the same time equal justice for men being tried under various laws for women,for no fault of theirs.Men must not be tortured or black-mailed using these laws
-we want fair and equal opportunities for all.No unfair reservations. Give grants on performance in school. No reservations. if u can get high marks then get grants. Open Candidates must not be at a loss cuz of these.Give backward people a chance to develop.
-transparency in the annual audit(I want to know where my tax money has been going,I definitely don't want it to go to some ministers and a bunchful of people's pockets!)
-we want all Political parties to fight and work for one ultimate cause,that is DEVELOPING INDIA
MY GRANDPA HAD BEEN TOLD THAT "INDIA IS A DEVELOPING COUNTRY"
MY FATHER HAD BEEN TOLD THAT "INDIA IS A DEVELOPING COUNTRY"
I HAVE BEEN TOLD THAT "INDIA IS A DEVELOPING COUNTRY"
I WANT TO KNOW,WHEN WOULD WE BE A DEVELOPED COUNTRY????
I don't want politicians to let India remain a developing country so that they could take loans from world bank on our name and stuff that money into their pockets
All in the name of OUR development!
Posted by Unknown at 11:52 PM No comments: Links to this post

from the article http://www.huffingtonpost.com/2009/02/08/ann-coulter-under-investi_n_165007.html:
Coulter was investigated and cleared of wrongdoing in 2006 for allegedly violating Florida's voter registration laws by voting in the wrong precinct.

does not seem that bad - she voted where she was - not like she voted twice or in someone else's name?

am not sure how its done in the US but atleaset here in India, besides soldiers, you need to turn up only at the voting booth closest to your home where u can vote - first you show ID (spl voter card or passport or DL or any govt id) if u rname is matched then u vote

of course in practice a lot of s**t happens. but only hear of charges against people who got violent or were impersonating someone. happens less now with the electronic machines. less counting violence and rigging too. one place where technology has had a +ve effect

Posted by Unknown at 7:04 PM No comments: Links to this post

Police forces have spent more than £20,000 on cardboard cut-outs of uniformed officers designed to confuse criminals.

It was billed as the latest police tactic to combat crime and now the idea has taken off nationwide.

Police figures show that forces across the country have spent more than £20,000 on the flat-pack PCs.

West Midlands police said it had ordered 80 cardboard constables at a cost of just over £10,000. In Derbyshire, £6,650 was spent over the past two years on a "substantial number" of cut-outs.

"The theory is that it creates the impression at first glance of a capable guardian being on site, which hopefully also reduces the perception of fear of crime," said a Derbyshire police spokesman.

A survey using the Freedom of Information Act revealed that 13 forces in England and Wales have used cardboard officers.

Essex police said it spent £760 on eight cut-outs. They have been deployed in petrol stations, to deter drivers from speeding away without paying for their fuel, and also in shops to discourage shoplifting.

The force would not reveal precisely where the cut-outs have been placed because "to release locations is likely to jeopardise the success of the trials".

Cleveland police spent £1,760 on cardboard officers for use in shops, petrol stations and retail parks in Hartlepool, Redcar and Stockton-on-Tees.

The other forces which have used cut-outs are North Wales, South Wales, Greater Manchester, Durham, Humberside, Lancashire, Avon and Somerset, Norfolk and Surrey.

Rank-and-file officers, however, questioned the wisdom of spending police funds on fake officers.

Simon Reed, vice-chairman of the Police Federation, said: "While I appreciate that money may be tight for policing, this does seems a drastic solution to avoid paying any salary and pension costs.

"Ultimately it will be for local residents to decide if cardboard police officers work for their community and are good use of their taxes."

Several forces admitted to having suffered the theft of cut-outs. Three went missing from filling stations in Derbyshire in the past two years, while two were stolen in Cleveland.

Humberside reported the theft of one cardboard officer, which disappeared from a Tesco supermarket in Grimsby last November.

A spokesman for West Midlands police, which had the highest spending on cut-outs, said that some of the money would be reclaimed from shops which benefited from the scheme, but could not say how much had been recouped so far.

Commercially-produced promotional cut-outs can cost from £12 and £30 each.

Posted by Unknown at 11:03 PM No comments: Links to this post

Posted by Unknown at 9:00 PM No comments: Links to this post 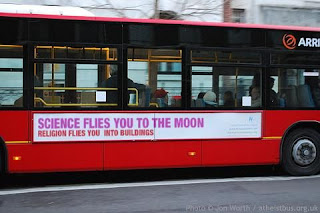 I belive in God - and I agree with this message to a large extent. right now it is blind belief in religion that's making a few bait others, and fewer go crazy and bomb others. its something that we all need to fix. make religion more private, not about public and more subtle spreading.

In India we have crazy rights & terrorists fighting with religion as the cause , missionaries steering up Hindus to become violent, government appeasing the minorities for votes, it sickens me to the core.

and its true - science has made things a lot better, but religion has just made things more segmented etc

spirituality is required but the present day religious set up is counter productive.

this image made me think in new ways, ty for posting it.

its true that science causes a lot of crap to - ask the people over at Hiroshima ... or anyone who's been the victim of a chemical leak ... but those are mistakes where as most modern religions at their core tell u - we are the best, spread this word ... science does not do that.

i agree we need more science, ethics, spirituality and less of religion. keep your religion at home with your other personal things.
Regards
Tushar Kapila

http://stephenbrooks.org/muon1/ Volunteer computer idle time to science
www.thehungersite.com , and www.bhookh.com feed hungry , its free. www.ecologyfund.com
Please add these to your start-up how to: http://tusharkapila.blogspot.com/2008/05/s.html
Posted by Unknown at 2:12 PM No comments: Links to this post


We use browser cookies. If you do not accept that please close this tab or window. More information http://ec.europa.eu/ipg/basics/legal/cookies/index_en.htm
Programming Php, Java apps