Bios Urn, nurture a tree with your body

Bios Urn, a completely biodegradable urn that contains a single tree seed. When planted, the tree seed is nourished by and absorbs the nutrients from the ashes. The urn itself is made from coconut shell and contains compacted peat and cellulose. The ashes are mixed with this, and the seed placed inside. You can even choose which type of tree you'd like to grow!

So which would you prefer; leaving behind a tree or a tombstone?

Would love to go like this. but first my body to medical science. after that they clean up (remove chemicals etc) best they can and then into a similar urn. 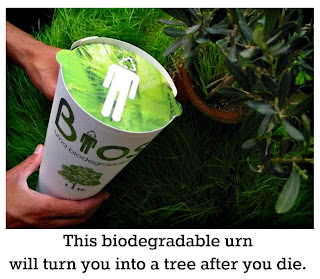 Posted by Unknown at 3:20 PM No comments: Links to this post

bag + money left at the Metro

feb 12,  dad was in hospital. i had come till Anil Kumble circle, MG Road, Blr in an auto from St Martha's, walked down to the station and run up as i had seen a train while walking down, but  I missed it - just as I got on top to the platform could see the train pull away.

Sat down and removed my shoes as I was hot with the running and walking! Then started chanting a buddist chant (I follow my own mix of hinduism, buddhism and my own beliefs interwoven with agnosticism) Anyway my bag was next to me on the bench. Then two women came and wanted to sit on the same bench, so I put my bag on the ground and continued to chant though very softly.

After few minutes the next train came to the other side, should have started to put my shoes on but I thought to my self - its going to take a while - since this is the first/ last stop, the train on the other side goes ahead 400- meters near Anil Kumble  cirlce then comes the other way and changes tracks to enter this platform. So I continued till the train changed tracks and came back "turned around". Then in a hurry put  on my shoes and rushed in. You gussed it -> scatter brain me left my bag back and did not even know it. At night (near 2150 time for last train) on way back from ofc realized that I had not brought lunch that day but should take bag back, when I could not find it. Looked around and tried to think back when I recalled. Went back to the metro for the way back sans back and hopes that I will get it.

At MG Road stop, went down and asked the customer care. She called someone and then asked me what was in the bag I said there would be a bill of Shashi Kapila's hospital stay (dad, had shifted  him from Vikram hospital to Matha's as Vikram ICU was prohibitively expensive). She asked was there any money? I had removed from the ATM 4 times as HDFC does not give 100s and I needed a few for my auto fares. I said it was between 8 and 9 but I can't recall exactly. She said to bring ID proof (original and one photo copy - efficiency :) ) the next day.

Brought id, narrated story, left out the shoes part but they reminded me and told me they had played back the CC TV footage :) Were very amused, I still did not know exact amount. I had not checked my account. It was over 11k, I did check my ATM records later it all added up :) Thank you Mertro folks for a cool ride, clean stations and a friendly atmosphere. Was so nice to talk in English, not be asked rudely why I did not know Kannada and to get my stuff back. Here is a copy of card I sent them. Also I was not carrying my phone so missed all the calls they made (over 9). My bag had a few visiting cards - had put them there for a situation like this and it worked!

Side bar - later was thinking if chanting in a station was a bad idea. Probably not; just get ready a few minutes before! Just in time can mean late or few things forgotten :) thank you humanity and hope we can make traffic, commuting and living with each other more pleasant and safe.

* I have asked for water from the guards a few times and always got it, wish you sold some on the plat form, as generally have time after buying the ticket and realizing there is still time for next train!

* The signage does not show current time, just next train time. That can be improve, show your local time in small 24 hour and 12 hour clock near the train timing or just show how many minutes to next train

* Also would like to see a year down the line - a way to recharge my
travel card using my netbanking (HDFC, Canara and the other banks with
good netbanking).

* as a thank you gave some chocolates the next day at MG Road, can only hope the folks on the first floor and who ever got the bag got some & know I'm very grateful.

Posted by Tushar Kapila at 9:57 PM No comments: Links to this post


We use browser cookies. If you do not accept that please close this tab or window. More information http://ec.europa.eu/ipg/basics/legal/cookies/index_en.htm
Programming Php, Java apps